Luckily before the crash I was able to get some nice flight footage of this foam de Havilland Vampire creation in the air flying great!

The DH Vampire was the 2nd jet to enter service with the RAF and was unusual for the time in that it was powered by a single jet engine, this allowed for a small and lightweight fighter aircraft, to maximise efficiency the jet pipe was kept short, hence the distinctive twin boom tail, all of these factors helped the Vampire to become the first aircraft in RAF service to exceed 500mph. De Havilland employed some techniques from the construction of the famous Mosquito, wood was therefore used in the construction of this classic jet! The Vampire broke several records in it's time and was the first jet aircraft to land on a carrier as well as being the first jet to complete a Trans-Atlantic flight, the Vampire became a huge success and served with many air forces around the world.

The Durafly® ™ Vampire is made from tough EPO foam and is superbly finished with waterslide decals. As well as looking the part, it is easy to assemble, being Plug N Fly, the EDF unit, ESC, UBEC and servo's are all pre-installed. The Vampire is pre-fitted with superb, scale-slow servoless retracts, they have a very positive lock which combined with the beefy struts and large rubber wheels, makes this jet perfect for almost any field.

Jet's are about performance and the Durafly® ™ Vampire will not disappoint, it has excellent speed and climb rate, when you combine this performance with the real presence of this model, not to mention the un-canny scale-like sound, the end result is one of the most realistic jet's in this class. Where the Vampire differs from other scale jet's is that it is almost impossible to stall and has an amazing off-power glide making for a very forgiving model that is really easy to live with. Fast, stable, scale, reliable, easy to live with, easy to fly and with presence in spades, the Durafly® ™ Vampire will stand out at any airfield, ideal for aspiring jet jockeys, a must for any jet fan!" 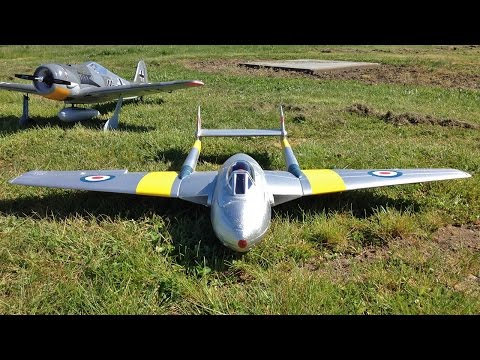 I choose to celebrate uploading my 400th video by uploading an RC Plane Crash Video of my good buddy Bill. He crashed his beautiful HobbyKing Durafly ...