Top 10 Fastest Helicopters in the World

It is a modern attack helicopter designed to carry out search and destroy operations against tanks, armoured, boats and low-speed and low-altitude aircraft. It can operate night and day, and in adverse weather conditions. It can attain a maximum speed of 299km/h (186 mph; 162 Knots) competing closely with the NH90 and Ka-52 Alligator helicopters.

The Mi-28NE Night Hunter is powered by two VK-2500 turboshaft engines manufactured by Klimov. Each engine generates a maximum take-off power of 2,200hp, has a service ceiling of 5,600m.

It is a medium-sized, twin-engine, multi-role military helicopter and was developed in response to NATO requirements for a battlefield helicopter which would also be capable of being operated in naval environments. The first flight in December 1995. It can fly at a maximum speed of 299 km/h making it one of the fastest helicopters in the world.

The AgustaWestland AW101(EH101 Merlin) is a helicopter originally developed in a joint effort between Westland Helicopters in the United Kingdom and Agusta in Italy for military applications, although it can also be used in civilian context, first flight on October, 1987.

The AgustaWestland AW101(EH101 Merlin) is powered by three Rolls-Royce Turbomeca RTM322-01 turboshaft engines developing 2,312 shaft horsepower each. It can fly at a maximum speed of 309 km/h (192 mph; 167 knots) making it one of the fastest helicopters in the world.

The Mil Mi-35M (Hind E) is an attack and troop transport helicopter produced by the Russian Mil Moscow Helicopter, it can fly at a maximum speed of 310 km/h (193 mph; 168 knots), is powered by two Klimov TV3-117VMA or VK-2500 turboshaft engines developing 2,500 horsepower each.

Mi-35 represents the standard version based on the Mi-24V. The helicopters in Brazilian Air Force (FAB) service are referred to as AH-2 Sabre.

The Leonardo (AgustaWestland) AW159 Lynx Wildcat is an enhanced version of the military-grade Westland Super Lynx helicopter for the British Army and Royal Navy. First flight in November, 2009.

The Boeing CH-47F Chinook is an advanced multi-mission helicopter for the U.S. Army and international defense forces. Is powered by two powerful Honeywell T55-GA-714A engines generating 4,886 shp of power each enable the CH-47F fly at altitudes up to 20,000ft (6,096m).

The Sikorsky X2 is a high speed helicopter developed by Sikorsky Aircraft.

The X3 is high speed helicopter was designed by Eurocopter (now Airbus Helicopters). The X3 is powered by 2 Rolls-Royce Turbomeca RTM322-01/9a turboshaft engines, generating 2,270 hp of power each.

The Eurocopter X3 hybrid helicopter has opened the frontiers of aviation by attaining a speed milestone of 472 km/h (293 mph, 255 knots) in level flight.

Eurocopter X3 achieved the historic 255-knot speed milestone with the X3 flying at an altitude of around 10,000 feet during a 40 minute test flight over southern France.

Top 10 Fastest Helicopters in the World 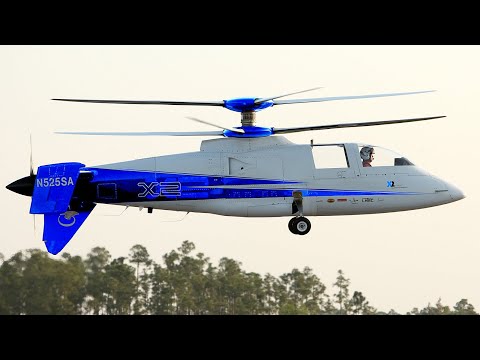