The aircraft was moved out of the hangar to conduct aircraft fueling tests, marking the completion of the initial aircraft construction phase and the beginning of the aircraft ground and flight testing phase.

Like the Virgin Galactic's WhiteKnight Two carrier aircraft, the Stratolaunch is designed to take off with a satellite launch vehicle, and fly to the approximate cruising altitude to release the launch vehicle and return for landing, while the rocket fires and orbits the satellite.
Unlike expended vertical launched rockets which are operational now, the Stratolaunch system is reusable and hence low cost, and will also significantly reduce the long wait times for satellite launches.

Built by Scaled Composites at the Mojave Air & Space Port in Mojave, California, the Stratolaunch is the largest aircraft by wingspan at 385 feet (117 m) and is also the largest all-composite aircraft ever built.

With “weight-on-wheels”, the aircraft now weights approximately 500,000 lbs and will have a maximum take off weight of 1,300,000 lb, with an operational range of approximately 2,000 nautical miles.

The Stratolauch have a double fuselage design, connected by a reinforced center wing. In addition to providing lift and stability, the center wing provide multiple under wing attachment points, for up to three Orbital ATK Pegasus XL rockets.

To reduce developmental cost and time, the engines, avionics, flight deck, landing gear and other systems were sourced from two used Boeing 747-400s.

Aiming for a maiden carrier aircraft flight later this year, Stratolaunch aims to perform first launch demonstration as early as 2019. 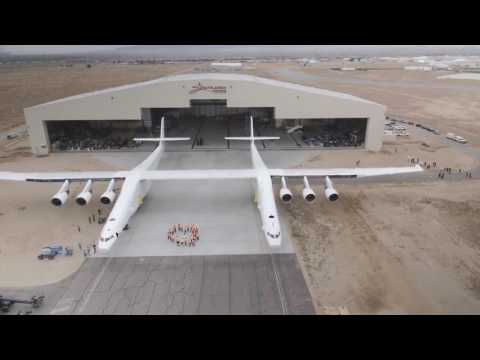