The Shaurya missile is a canister launched hypersonic surface-to-surface tactical missile developed by the Indian Defence Research and Development Organisation (DRDO) for use by the Indian Armed Forces. It has a range of 700 km (430 mi) and is capable of carrying a payload of one ton conventional or nuclear warhead. It gives the potential to strike in the short-intermediate range against any adversary.

The Shaurya missile is speculated to be the land version of the under-water Sagarika K-15 missile, although DRDO officials have reportedly denied its connection with the K-15 programme Shaurya is stored in a composite canister, which makes it much easier to store for long periods without maintenance as well as to handle and transport. It also houses the gas generator to eject the missile from the canister before its solid propellant motors take over to hurl it at the intended target.

Shaurya missiles can remain hidden or camouflaged in underground silos from enemy surveillance or satellites till they are fired from the special storage-cum-launch canisters. DRDO scientists admit that given Shaurya's limited range at present, either the silos will have to be constructed closer to India's borders or an extended range version will have to be developed. Defence scientists say the high-speed, two-stage Shaurya is highly manoeuvrable which also makes it less vulnerable to existing anti-missile defence systems. Shaurya can reach a velocity of Mach 7.5 even at low altitudes. On 12 November 2008, the missile reached a velocity of Mach 5 as it crossed a distance of 300 km, with a surface temperature of 700 °Celsius. The missile performed rolls to spread the heat uniformly on its surface. Flight time is between 500 seconds and 700 seconds. It has been described as a complex system with high-performance navigation and guidance systems, efficient propulsion systems, state-of-the-art control technologies and canisterised launch. It can be easily transported by road and launched by TEL. The missile, encased in a canister, is mounted on a single vehicle, which has only a driver’s cabin, and the vehicle itself is the launch platform. This "single vehicle solution" reduces its signature – it cannot be easily detected by satellites – and makes its deployment easy. The gas generator, located at the bottom of the canister, fires for about a second and a half. It produces high pressure gas, which expands and ejects the missile from the tube. The missile has six motors; the first one is the motor in the gas generator. The centrepiece of a host of new technologies incorporated in Shaurya is its ring laser gyroscope and accelerometer. The ring laser gyroscope was tested and integrated by the Research Centre Imarat (RCI) based in Hyderabad. 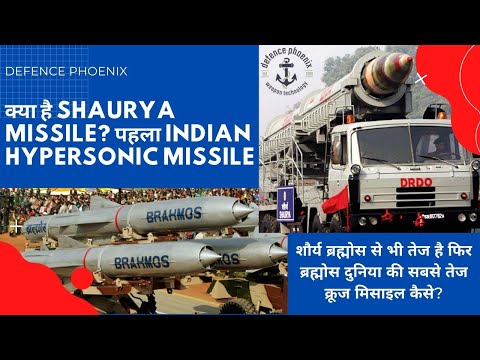