The JConcepts Team traveled up north to RC Madness in Enfield, Connecticut, talk about having it all. RC Madness is an incredible facility complete with everything an RC enthusiast could want! There was a giant rock crawling course, an on road course, a turf track, an outdoor off-road dirt track, an indoor carpet track, pit space, monster truck competitions, and a hobby shop. When you pull up to the facility it was kind of on its own with not much around, but the amount of passion and effort that went into its creation was extremely apparent. The team felt like the track layout on the turf track was more challenging this year, but it was a lot of fun to race on!

We had many JConcepts drivers attend this event which really amped up the community vibe. It was awesome to see drivers helping each other out, wrenching together, and sharing some good laughs. The feel good vibe at this event was contagious! One of the coolest things was seeing young drivers go up and talk to pros like Phend and get autographs, photos, and share their fan art. The positivity, desire, and enthusiasm for the sport that these young drivers showed reminds us why we are all ultimately here. We’re here for the community, we’re here to be a part of something, we’re here to add an extra dose of positivity into our lives when everything else around us maybe feels less. At the end of the qualifying day we took a photo of some of the guys who TQ’d like Bishop, Breshanan, and Phend. After the photo was taken, the sun was setting, the fall weather was rolling in and the guys were congratulating each other one their runs.

Another event that took place at the same time over on the outdoor dirt track at RC Madness was the RC Monster Truck Challenge! They were a very cool group of people! Essentially there are two lanes, one for each driver, that are identical and it’s about who finishes first with the least amount of DQs. DNF’s or DQ’s will move you to the bottom of the qualifying bracket. Jason Ruona brought 4 of his monster trucks up with him to compete. He was running back and forth between doing the turf race and the monster truck competition. Ruona had a great finish in the Pro Mod class taking 2nd place with his Hot Wheels truck. Derrick Algieri won driving the Titan and Kyle DeFalco earned the final podium spot driving the War Wizard. In the Retro Monster Truck class, Cierra Maimone dominated taking the win and Ethan Saunders also had great performances taking the 2nd spot! Cierra was running the JConcepts Regulator Monster Truck Chassis and Steering Conversion Kit as well as the 1989 Ford F-250 body. Popular Tire choices for this event were the Renegades and Firestorms! 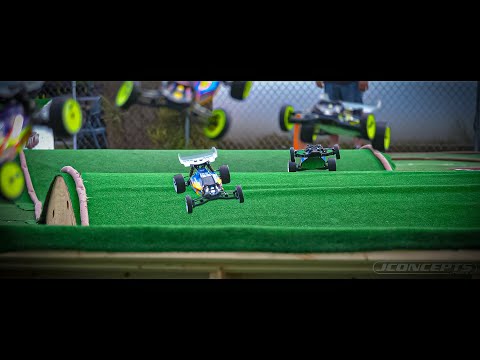 Highlights from the NCTS Turf Nationals and the RC Monster Truck Challenge hosted by RC Madness in Enfield, CT. Video courtesy of Hannah Hardison with...