Přidané 2 roky dozadu by
261 Zobrazení
This is footage of two RC F7F Tigercats flying in formation at Warbirds Over Whatcom. The first is a 1700mm FMS F7F Tigercat Bad Kitty RC Plane, which received a nice finish to make it look even more scale as an RC Plane! The second plane is a FlightlineRC F7F Tigercat.

This is how FMS describes this Grumman F7F Tigercat Warbird RC Model:

" The FMS 1700mm Tiger Cat pools the best structural features from FMS’ classic works. It adopts the popular quick and easy assembly and disassembly structure. Screws can do all assembly and disassembly work. In addition, with the latest multi-connect technology, FMS has streamlined the wing system, eliminating the wiring problems, and making it easier to install and dismantle in a short time. The well-designed battery compartment makes full use of airframe space, allowing for higher-storage batteries and more flying choices.

It is more than an RC model. It is one for the collectors. Go get the FMS 1700MM “Tiger Cat” to experience its magnificence."

This is how Horizon Hobby describes this RC Warbird:

"The Grumman F7F Tigercat was a heavy-class fighter that served with the United States Navy and United States Marine Corps at the close of WWII and remained in service until 1954. It was the first twin-engine fighter employed by the Navy and distinguished itself in service during the Korean War.

The FMS F7F Tigercat PNP 1700mm represents the best FMS classic works has to offer to date. It adopts the popular quick and easy assembly and disassembly structure—no glue required. In addition, this model features the latest in multi-connect technology with streamlined wiring that eliminates the hassle of making multiple connections at the wing joint. Lightweight construction with EPO means you can count on a high-level of durability and a light wing load that translates naturally into incredible flight performance. The water-based paint used to finish this model minimizes blistering from sun and provides a vibrant appearance. Each control is individually linked with one or more dedicated metal-gear digital micro servos.

A proud achievement of this FMS model is the electric retract drive system that boasts a locked-rotor mode with overcurrent protection. The CNC-processed metal construction also offers a beautiful scale appearance, precision movement and high-level of durability. Factory installed sequencing gear doors are just icing on the cake. With a 62mm front wheel and 84mm main wheels, takeoff and landing on paved or a grass surface is possible. Plus you’ll have more than enough power given that the large brushless outrunner motors and its high-power ESCs simply operate off just one 6S 5000mAh LiPo pack. The battery compartment makes full use of airframe space by offering enough room to fit a wide range of battery capacities to enjoy higher performance or longer flight times.

The scale detail of this Tigercat is abundant with simulated engine features, operational scale propellers, intricate rivet and panel lines, plus a painted pilot figure and functional LED lights. Choose the blue or silver painted version. The blue version includes four sets of decals to help make your F7F stand out. A silver version is also available with factory applied “La Patrona” livery. Finally, with the FMS F7F Tigercat, you can bring a rare warbird to life again and showcase its mighty power as often as you like."

This is how Motion RC describes this plane:

"The Grumman F7F Tigercat is a twin piston engine aircraft developed during World War II. Originally envisioned as a carrier-based naval fighter, the Tigercat underwent several iterations and was later optimized for a variety of roles. Although World War II ended before it became fully combat operational, many variants of the Tigercat went on to serve in the Korean War in capacities including as a night fighter, ground attack platform, and a dependable reconnaissance platform.

I hope you enjoyed this video and I encourage you to follow me on social media to keep up with all of the fun: 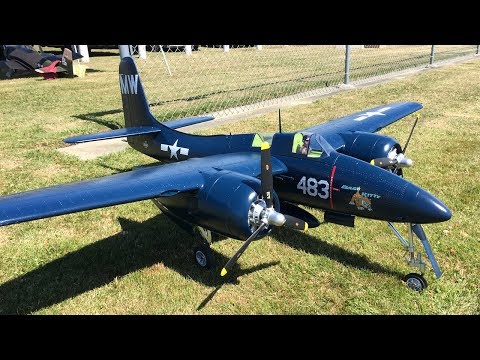 This is footage of two RC F7F Tigercats flying in formation at Warbirds Over Whatcom. The first is a 1700mm FMS F7F Tigercat Bad Kitty RC Plane, which...